To realize your development goals and meet your future challanges

A big part of the ECU software development process is about calibrating the software by changing data parameters used by the software’s control algorithms. The calibration process is an iterative process that generates a lot of different versions and variants of the calibration datasets. These datasets are often stored as files either locally or on a network drive and it’s a significant risk that these files eventually get mixed up or misplaced. 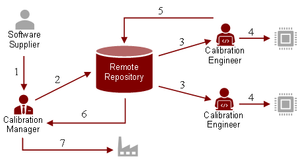 Step 3-6 will be repeated several times before any calibration data is released to production.